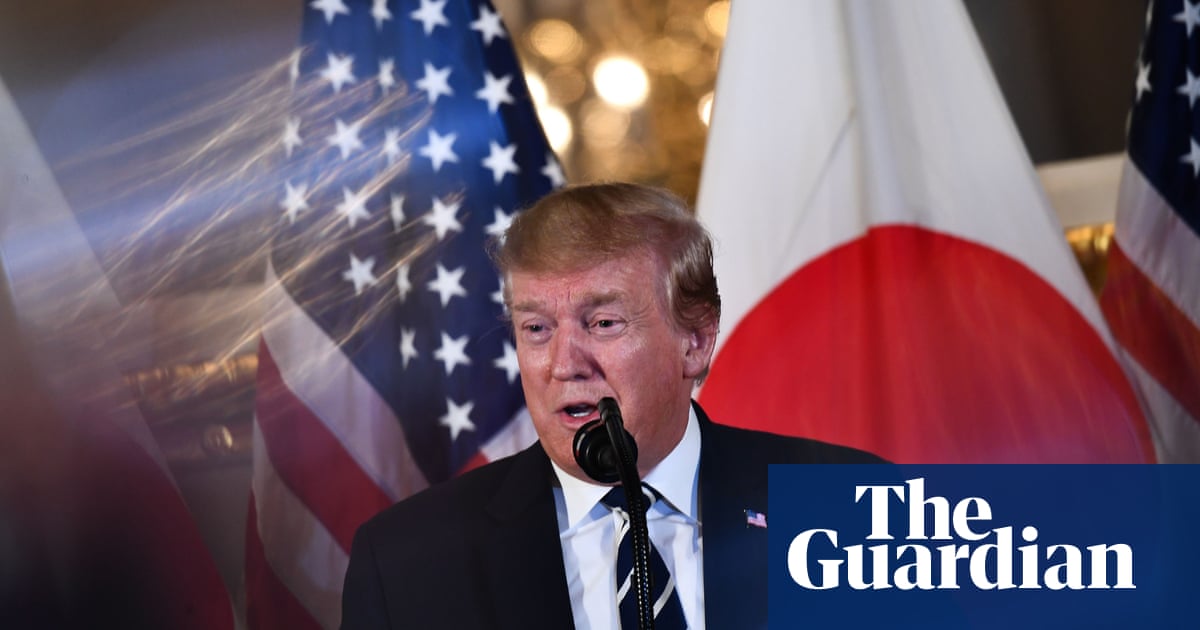 Donald Trump kicked off his state visit to Japan on Saturday by urging Japanese business leaders to increase investment in the US but he also complained about his own central bank and knocked his hosts for having a substantial edge on trade, which he said negotiators were trying to even out.

Leaving political turmoil behind him, Trump was nonetheless sent on his way by an anonymously sourced CNN report which said White House staffers dreaded and tried to avoid long trips on Air Force One, because the president rarely sleeps, busily tweets and demands their company.

After 15 hours in the air, Trump arrived in Tokyo on Saturday. The visit is meant to be largely ceremonial. The president will meet Shinzo Abe, the prime minister, on Sunday for a round of golf, a sumo tournament and a private dinner. The two men share a warm relationship that Abe aims to emphasize as Washington considers tariffs on Japanese car exports it views as a potential national security threat.

The US is already in the middle of an expensive trade war with China, and similar tensions are simmering with the European Union. Trade is expected to be addressed during more formal talks between Trump and Abe on Monday, but officials have played down the possibility of a deal being announced during the visit.

North Koreas nuclear and missile programs are also likely to be on the agenda, a fact underlined by remarks on Saturday from Trump national security adviser John Bolton. The mustachioed hawk said recent missile tests by Pyongyang violated United Nations security council resolutions, the first time a senior US official has made such a statement.

Trump is also due to become the first foreign leader to be received by Emperor Naruhito. Naruhito and Empress Masako, who studied at Harvard, will host an elaborate dinner on Monday night. In Washington on Thursday, Trump made clear that he was flattered by the invitation.

The CNN report about Trump and Air Force One quoted on anonymous US official as saying travelling with the president was like being held captive.

Current and former officials have described White House trips as grueling endeavors accompanied by long hours, the report read, but several privately said the flights overseas are easily the worst. The duration can stretch nearly 20 hours. Sleeping space is limited. The televisions are streaming Fox News constantly. And if the headlines flashing across the bottom of the screen are unfavorable to their boss, aides know its time to buckle up for a turbulent ride.

Trump tweeted from the plane on the way to Tokyo, a journey which involved a stop for refuelling in Alaska.

Trade was among the subjects covered The real trade war began 30 years ago, the president wrote, and we lost we dont lose any more! as was a jab at Mark Warner of Virginia, the ranking Democrat on the Senate intelligence committee and a complaint about Trump-supporting bikers having problems getting a permit for a parade in Washington.

They love our country and love our flag, the president tweeted. If I can help, I will!

In Tokyo, after a red-carpet welcome, Trump attended a reception at the residence of US ambassador William Hagerty. The White House said top executives from Toyota, Nissan, Honda, SoftBank and Rakuten were in attendance.

Trump told them there had never been a better time to invest in the US, although he also repeated a familiar complaint that Federal Reserve policies had kept US economic growth from reaching its full potential.

Trump also got in a dig at Japan, saying he wanted a deal to address the trade imbalance between the two countries and ensure fairness and reciprocity.

Japan has had a substantial edge for many, many years, but thats OK, he said. Maybe thats why you like us so much.

Hours before Trumps arrival, a medium-strength earthquake hit eastern Japan, causing buildings to shake in Tokyo. The epicenter was southern Chiba, south-east of the capital, where Trump is due to play golf on Sunday. No tsunami warning was issued and there were no immediate reports of damage.

In the evening, the Tokyo Sky Tree tower was lit up red, white and blue.

Get 250+ Daily Website Visitors On Complete Autopilot in ANY Niche with 100% Real FREE Traffic
My Mobile Money Pages - 7 Yrs Old - Paid Over 3m To Aff!!
Win 91.3% Of All Your Sports Bets Following Smart Money!
The Mom Money Masterclass: Cash In On The Mom Blogger Boom!
Help Anyone Beat Their Traffic Ticket! Great Money Maker For You.