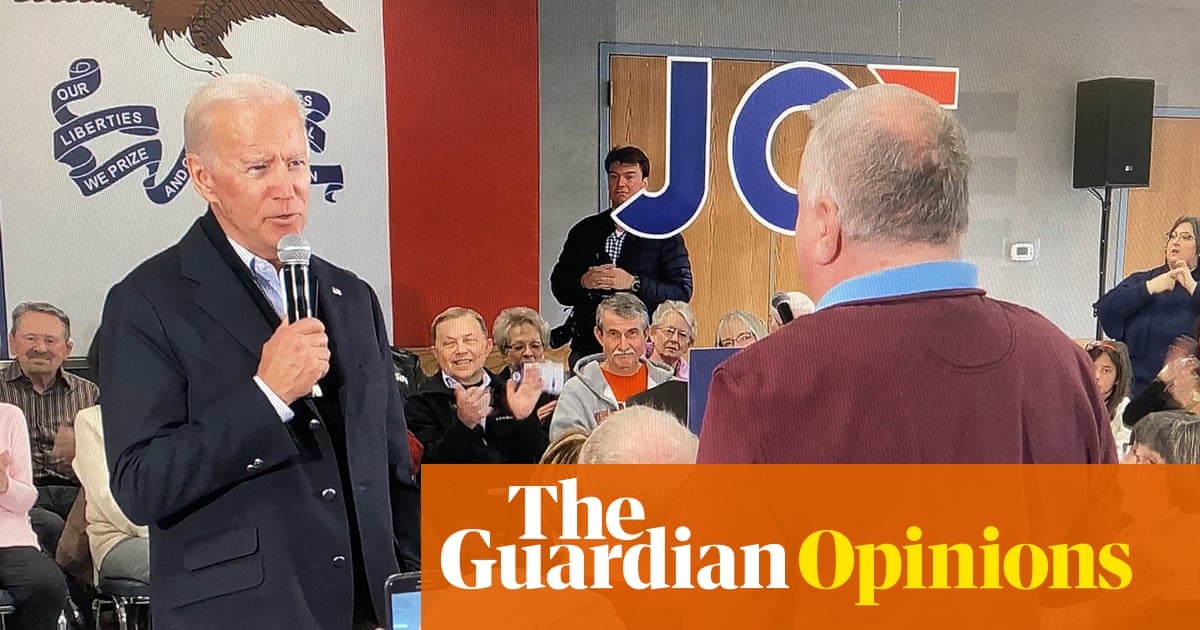 On Thursday, Joe Biden, the Democratic frontrunner for president, angrily confronted a voter in Iowa who didnt like him very much. Biden deemed him a damn liar and too old to vote for me and maybe, just maybe, fat.

The man, an 83-year-old retired farmer, had challenged Biden on one of his many vulnerabilities his sons high-paying work for a Ukrainian energy company. Without direct evidence, the man said Biden, then the vice-president, secured his son the job. Youre selling access to the president just like [Trump] is, the unidentified man said.

The man also attacked the 77-year-olds fitness for the presidency, saying Biden was too old for the job.

Im not sedentary, Biden fumed in response. You want to check my shape on, lets do push-ups together, lets run, lets do whatever you want to do, lets take an IQ test. He also apparently added, during the exchange, But look, fat, heres the deal, though his campaign maintains that Biden had begun to say look, facts.

The confrontation was vintage Biden: rambling if aggressive, swaggering and strange. A thousand takes flew. Voters and pundits wondered if the gaffe-prone Biden was up for challenging President Donald Trump, the clown king of trolling.

It may be difficult to remember, but Biden was once praised for his aggressive style, in particular the perception that he brawled effectively with Republican Paul Ryan during the 2012 vice-presidential debates. Though deeply flawed as a candidate, Biden should not be underestimated in the Democratic primary and, if he prevails, in a match-up against Trump. Voter turnout will probably surge and anyone, Biden included, running under the Democratic banner will benefit from a furious and united anti-Trump vote. Bidens punch-drunk routine could go over well against an infantile bully like Trump. We know that, at the very least, Biden wont shrink from a fight.

But the confrontation with the Iowa voter, a self-professed Elizabeth Warren supporter, underscored that Biden is not the ideal Democrat to put up against Trump. A disciplined, unflappable messenger Bernie Sanders comes to mind could better prosecute the case without taking the schoolyard bait of responding to a dopey nickname.

More importantly, the Iowan highlighted a more telling weakness: Bidens disastrous foreign policy record. Hunter Biden was earning as much as $50,000 a month while sitting on the board of one of the largest natural gas companies in Ukraine during his fathers vice-presidency. While its not illegal to make a living abroad, there is little question that, were Hunters last name not Biden, he wouldnt have been able to secure such a lucrative gig. Neither vice-president nor son seemed to care about the appearance of impropriety.

Its also not clear Biden knows how to effectively attack Trump. Though Bidens latest broadside against the president a video of world leaders mocking him, which was enthusiastically praised by the liberal political class may have seemed like a grievous blow, it was an inadvertent reminder of why Trump won in the first place. Demonizing global elites was always Trumps calling card; a farmer in Iowa or a laid-off factory worker in Michigan doesnt necessarily care if the French laugh at us.

Trump won a Republican primary in part by ridiculing a rival, Jeb Bush, for being related to the president who started the Iraq war. Biden enthusiastically supported that foreign intervention, the most catastrophic since Vietnam, and has rarely met a regime-change conflict he didnt like. He has no serious proposals for ending the wars in Yemen or Afghanistan. He has been an unstinting supporter of Israels rightwing governments. His hope is to restore some sort of vague, cold war-era consensus, with Russia as the eternal enemy and American troops marching across the world.

Due to a cocktail of lingering political talent and sexism, Biden may avoid being stamped as an out-of-touch globalist like Hillary Clinton, though their approach to governing is indistinguishable. Politics in this country can be as much aesthetics as anything else. A bumbling brawler just doesnt seem like a booster of cataclysmic war.

So Biden in Iowa, perhaps calling a man fat, may be on to something. The longer we think of him this way, as a grandpa longing for push-up contests and tripping over his words, the less we remember what he truly is and what he did.