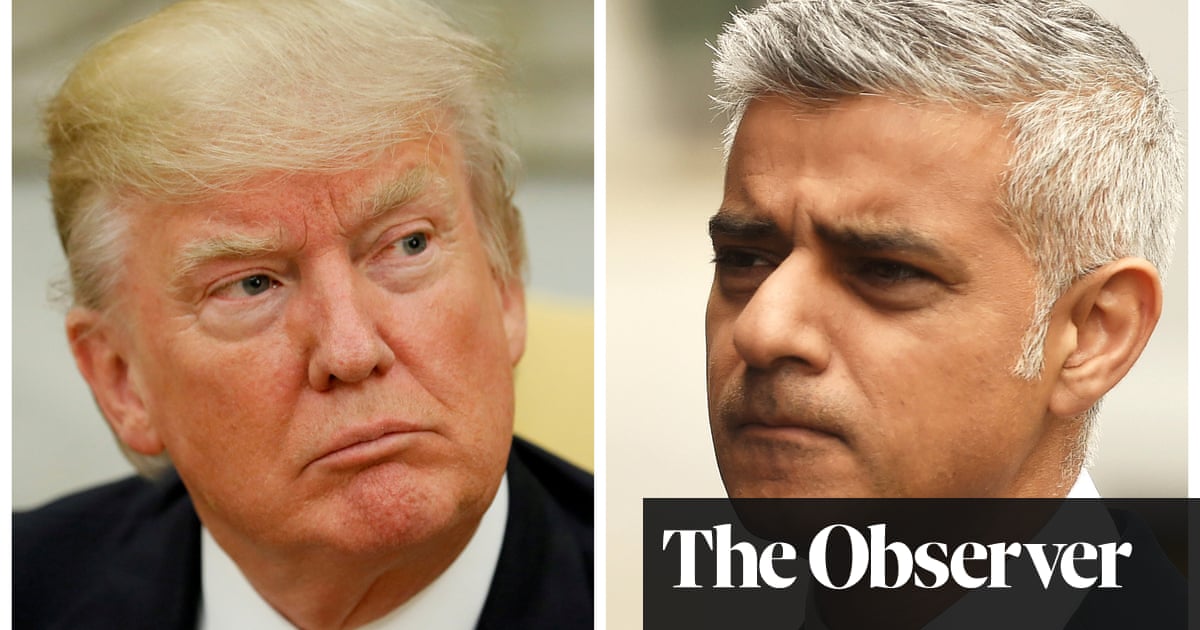 The mayor of London, Sadiq Khan, has compared the language used by Donald Trump to rally his supporters to that of the fascists of the 20th century in an explosive intervention before the US presidents state visit to London that begins on Monday.

Writing in the Observer, Khan condemned the red-carpet treatment being afforded to Trump who, with his wife Melania, will be a guest of the Queen during his three-day stay, which is expected to provoke massive protests in the capital on Tuesday.

Khan said: President Donald Trump is just one of the most egregious examples of a growing global threat. The far right is on the rise around the world, threatening our hard-won rights and freedoms and the values that have defined our liberal, democratic societies for more than 70 years.

Viktor Orbn in Hungary, Matteo Salvini in Italy, Marine Le Pen in France and Nigel Farage here in the UK are using the same divisive tropes of the fascists of the 20th century to garner support, but with new sinister methods to deliver their message. And they are gaining ground and winning power and influence in places that would have been unthinkable just a few years ago.

Khan, who has had a feud with Trump since becoming mayor in 2016, adds: This is a man who also tried to exploit Londoners fears following a horrific terrorist attack on our city, amplified the tweets of a British far-right racist group, denounced as fake news the robust scientific evidence warning of the dangers of climate change, and is now trying to interfere shamelessly in the Conservative party leadership race by backing Boris Johnson because he believes it would enable him to gain an ally in Number 10 for his divisive agenda.

On Saturday Trump defied diplomatic convention which dictates that leaders do not weigh in to the domestic politics of other nations, particularly ahead of visits, by backing Johnson to succeed Theresa May in an interview with the Sun. He also used the interview to describe the Duchess of Sussex, as nasty.

In another interview in the Sunday Times he said he would want to know Jeremy Corbyn before sharing American intelligence and suggested Nigel Farage negotiate with Brussels if the EU failed to give Britain what it wants.

Mel Stride, the newly appointed Commons leader, made clear his surprise at Trumps comments, saying that while the president was entitled to his opinion, he would not be picking the next British prime minister.

Corbyn said: President Trumps attempt to decide who will be Britains next prime minister is an entirely unacceptable interference in our countrys democracy. The next prime minister should be chosen not by the US president, nor by 100,000 unrepresentative Conservative party members, but by the British people in a general election.

Jo Swinson, deputy leader of the Liberal Democrats, said: It shouldnt come as a surprise that Donald Trump backs Boris, theyre cut from the same cloth. Boris Johnson is what youd get if you sent Donald Trump to Eton.

Theyre both unqualified to lead, both revel in offending people and both represent the strain of nationalism and populism that we need a liberal movement to stand up to.

In May 2016 Trump challenged Khan to an IQ test, after the mayor said the presidents views on Islam were ignorant. Then, following the terrorist attack on London Bridge and Borough market in 2017, the president accused Khan of pathetic behaviour. In July last year Trump said Khan had done a very bad job on terrorism.

Organisers of the protests on Tuesday say they will register their anger both against Trump and his wider views, including those on Brexit, which the US president has made clear he supports. Alena Ivanova, a campaign organiser for Another Europe is Possible, said: Tuesdays protests arent just about Trump, theyre about Trumpism a politics of racism and bigotry. Trump is part of a global nationalist surge, and Brexit and its cheerleaders are the British franchise of it. Like Trump, Brexit is a threat to our basic rights and freedoms, and promises a future of division, despair and rightwing economics.

At least 250,000 people are expected to turn out in central London at 11am, on a route between Trafalgar Square and Parliament Square, when Trump meets Theresa May in Downing Street.

Organisers of the rally claim that US officials have pressured the Metropolitan police to impose an unprecedented exclusion zone around Trumps route to keep him at a distance from the public.

One plan is for a cage or pen to hold demonstrators on Whitehall about 70 metres from Downing Street to keep them out of earshot during Trumps meeting with May.

They get to choose who goes in and who goes out , which is a totally ridiculous proposition on our right to protest, said Asad Rehman of the Stop Trump Coalition.

The giant Trump baby blimp is expected to be deployed in Trafalgar Square, but only if the fundraising page for charities against the politics of hate and division reaches 30,000, organisers say.