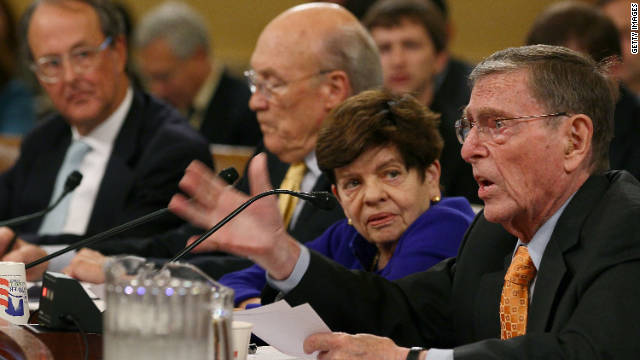 Washington (CNN)Alice Rivlin, the first leader of the Congressional Budget Office and the first female director of the White House budget office, died at age 88, The Brookings Institution said Tuesday.

“Alice Rivlin was renowned for her exceptional contributions to so many areas of public policy and her distinguished public service as founder of the Congressional Budget Office, head of OMB and Vice Chair of the Federal Reserve Board,” former Federal Reserve chairwoman Janet Yellen, a Brookings fellow who was the first woman to lead the Fed, said in the think tank’s remembrance of Rivlin.
The CBO, in a statement from its director Keith Hall, marked the death of its founding director, calling it a loss of a “true public servant.”
“Above all, she forged a commitment to providing objective, nonpartisan information to help the Congress make eﬀective budget and economic policy,” Hall said. “And her commitment to high-quality analysis, well thought out and clearly presented, continues to be a guiding principle of CBO.”
As Brookings noted, Rivlin worked in three separate presidential administrations and was the founding director of the CBO, a nonpartisan office whose analyses of proposed legislation sets the terms for Washington policy debates.
She went on to become the director of the White House Office of Management and Budget in the Clinton administration, becoming the first woman to hold the top White House role.
Rivlin led the OMB through the 21-day government shutdown during the Clinton administration, which was the longest shutdown on record until a 35-day shutdown that ended earlier this year.
Rivlin told CNN amid the shutdown this year that when she led the budget office, she urged Clinton officials to make decisions that served as a visual reminder the government was closed, like cutting the power to the National Christmas Tree.
“I thought we wanted to make as clear as possible that the shutdown was inconveniencing people,” Rivlin told CNN at the time.
At different points throughout her lengthy public career, Rivlin held positions with the Brookings Institution as well as academic roles including at Georgetown University as a visiting professor, and, in 1983, she was named a MacArthur fellow.